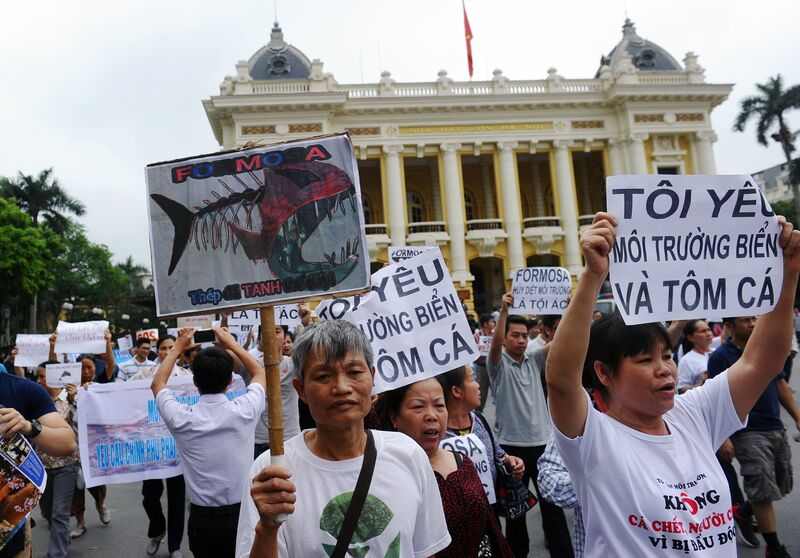 Millions of dead fish stretched out over 200 kilometers of central Vietnamese beaches are posing the biggest test so far for the new government.

The Communist administration led by Prime Minister Nguyen Xuan Phuc has been criticized on social media for a lack of transparency and slow response, with thousands protesting Sunday in major cities and provincial areas.

The government says it doesn’t know why the wild and farmed fish were found dead on the coast of four provinces from April 6 to April 18. The phenomenon “caused economic and environmental damage, hurt the fishery industry, and particularly resulted in puzzled sentiment among citizens,” it said in a statement April 28.

In a country where public protests are rare, anger over the dead fish has created a challenge for officials in how to react: While an offshoot of Taiwan’s Formosa Plastics has been questioned over the incident and drew ire on social media, the government must also assure foreign companies it welcomes their business given the focus on investment to drive the economy.

“It’s their first crisis and it’s really a delicate one,” said Fred Burke, managing partner at law firm Baker & McKenzie (Vietnam) Ltd. “Millions of livelihoods are at risk. The population is extremely unhappy.” Burke is a member of a government council and advises on foreign investment projects in the country.

With information scarce, the incident has heightened concerns about damage to the environment, food safety and how businesses are regulated. State media raised questions about a waste pipe running into the sea from Formosa’s steel plant being built in Ha Tinh province.

Formosa Ha Tinh Steel Corp. “is deeply surprised and sorry about” the fish deaths, it said in a statement April 26, adding there is no proven link to the incident. It said its total investment in the Vietnam plant was $10.5 billion, including $45 million for a waste water treatment system. That system has regulatory permits and meets national standards, it said.

The government has said there is no evidence for now to show Formosa was responsible. The fish may have been killed by toxins discharged by human activities or algal blooms known as a red tide, it said.

Even so, thousands protested in sites on Sunday including the capital Hanoi. In Ho Chi Minh City, the crowd of 1,000 carried signs reading “please return a clean sea to us” and “stop discharging waste water into the sea.”

“We wanted to raise our voice to protect our environment,” said Tran Thi Thu Nguyet, who joined the rally. Facebook posts also showed photos of protests in southern and central provinces.

Fishing and tourism have been hurt. Fishermen in central Quang Binh province have lost 115 billion dong ($5.2 million), according to the local government. About 30 percent of tourists canceled visits to the province which houses Son Doong, the world’s largest cave, during a four-day holiday starting April 30, it said.

In an unusually candid response, the government admitted it was slow to react, and new environment minister Tran Hong Ha publicly apologized. “The initial handling process was passive,” the administration said in its April 28 statement. Environmental monitoring was “untimely, inaccurate, and infrequent,” in part as some systems weren’t linked.

Anger spread on social media after a local Formosa official said Vietnamese should choose between their seafood industry or a steel plant. The company later apologized for the comment, according to local media.

Still, hundreds of people have used Facebook to urge the government to close the plant. “For people’s health and our motherland protection, let’s ask Formosa to compensate for the fishermen and kick it out of our country right away,” said a user named Truong Thu Ha. More than 100,000 people signed a petition calling for U.S. President Barack Obama to raise the issue with Vietnam in his visit this month.

“Vietnamese who are rarely consulted about and aware of investment projects face a big crisis of confidence,” said Thi Nguyen, a Ho Chi Minh City-based independent environmental consultant. “Foreign investment is important but the Vietnamese government shouldn’t attract foreign investment at any cost, and this disaster proved that.”

Vu Tu Thanh, the chief Vietnam representative of the U.S.-Asean Business Council, said the government must walk a line between assuaging public anger and not unnerving foreign businesses. Companies based in Vietnam from nations including Japan and the U.S. are watching to see if the country moves to retroactively amend regulations, Thanh said.

Vietnam’s government has sought foreign investment to help it achieve this year’s growth target of 6.7 percent. The economy grew 5.46 percent in the first quarter, versus 7.01 percent in the last quarter of 2015 as income from crude oil and agriculture production dropped.

Taiwan was the third-largest investor in Vietnam in the first quarter, after South Korea and Singapore. It invested $465.6 million in the period, according to Vietnam government figures.

Formosa has been the focus of public anger in Vietnam before. In May 2014 it and other Taiwanese businesses were attacked by protesters after China placed an oil rig in disputed waters off Vietnam’s coast. Formosa said the riots, where one Chinese worker died of heat stroke, caused $3 million in losses, and it received 30 billion dong in compensation.

“What the government is worried about is if they are too vocal in criticizing them, it will still stir up anti-Chinese sentiment and create trouble,” said Burke from Baker & McKenzie, referring to Formosa. “But if they are not vocal enough, they are viewed as coddling these guys who are seen as being disrespectful of Vietnam and its environment.”

The latest incident adds to concerns about food safety. Local media have reported recently that toxins are sometimes found in pork and vegetables. While the government banned the use of the dead fish in central provinces for food or animal feed, many locals expressed concern it may be processed into fish sauce, a family staple.

“I’m stocking enough sauce for a year,” said housewife Nguyen Thi Lan as she piled sauce bottles into her basket at a supermarket in Hanoi. “I need to avoid sauce made out of dead fish before it spreads.”